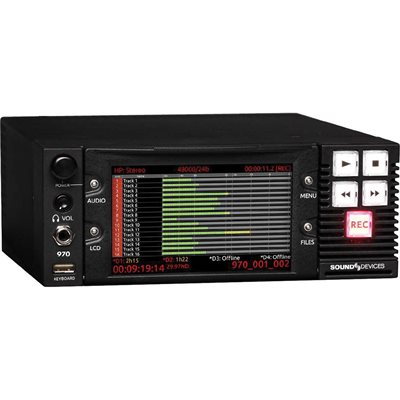 Perfect Sync
With its built-in, rock-steady Ambient timecode generator, the 970 can operate as either the master clock or it can be jammed to external devices cameras and other sources. All common production time code rates and modes are supported. The 970 also supports clock synchronization from external word clock, video, MADI, or AES. To simplify connection of multiple digital inputs, SRC’s are available at each input.

PowerSafe™ and Dual Power Supplies
PowerSafe™ circuitry provides a constant 10-second power reserve. In the event of power loss, the 970 continues to operate for up to 10 seconds, then cleanly stops any file operation and safely shuts down. The 970 draws 10-27 VDC through a four-pin XLR connector. A secondary connection allows connection to redundant power supplies.

Network Connected
The 970 can be controlled from browser-capable computers and tablets. When connected to a data network, transport controls and setup menu controls are available on PIXNET. PIXNET offers control of one or multiple 970 recorders. Multiple units can be grouped for simultaneous control.Intuitive InterfaceThe 970 was designed with knowledge gained from the industry’s top engineers and from Sound Devices expertise in field mixers. Recognizing that sounds engineers operate in fast-paced environments, important controls are a knob or a switch away, while extended features are quickly accessed with the intuitive LCD-based control.