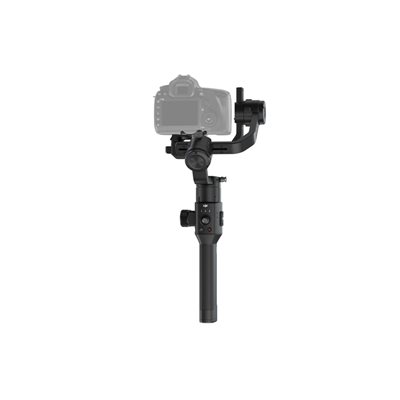 The DJI Ronin-S is more than just a miniaturized version of the larger Ronin gimbal stabilizers; it represents a scalable ecosystem for integrating DSLR and mirrorless cameras into professional-grade workflows. The single-handed form factor of the Ronin-S lends itself to lighter cameras. But don't let its size fool you; the Ronin-S has a lot going on under the hood. Separate modules are available for the handle and accessory docks, allowing you to customize the gimbal based on how you wish to operate it.

The DJI Ronin S handheld gimbal has been created to take your production to new cinematic heights with an innovative design that holds the camera above the rear motor for an unimpeded view of the LCD screen. Designed to support both mirrorless and DSLR cameras, the Ronin-S uses high-torque motors to keep your shot steady, even when shooting with heavier gear. Dedicated controls allow you to switch between two customisable modes and a highly responsive sports mode. The gimbal supports a dual-handheld bar, a focus command unit, and can even be removed from the handle and mounted on a range of other film making tools like sliders, jibs, and RC buggies for complete creative freedom.

Three Axis Stabiliser and Offset Roll Motor With cutting edge high-torque motors that deliver incredibly steady three axis stabilisation, the Ronin-S Gimbal allows for the capture of professional, highly controlled cinematic footage. Using an innovative design that positions the camera above the roll axis arm of the gimbal, a clear view of the rear LCD screen is possible, so you can track your shot perfectly. This also allows you to transition smoothly between upright and underslung positions in one take.

Push to Adjust, Axis Lock and Sport Mode An all-new push mode allows for hand adjustment of the pan and tilt axis while the axis lock mode helps to achieve a faster setup time. For tracking faster moving subject the Ronin S features a sport mode that increases the responsiveness of the gimbal for quicker panning and following, perfect for run-and-gun operators who prefer to shoot in the middle of the action.

Customisable SmoothTrack Settings DJI’s SmoothTrack technology keeps camera movements steady and can be adjusted for refined motor performance. The gimbal also provides the ability to customise and store your favourite settings in two groups that can be toggled with the press of a button, allowing you to adapt to your environment and change the way the gimbal responds to your movements.

Built for Professionals The Ronin S has been designed for videographers and cinematographers who need a reliable camera rig that can be used comfortably for as long as it takes to get the shot. In addition to the long battery life the battery can be hot swapped for theoretically limitless shooting times. The gimbal also features a joystick for framing control as well as an integrated start/stop recording button.

Mobile App with Intelligent Shooting Modes Built-in connectivity for smart devices allows you to access several intelligent modes like Panorama, Track and Hyperlapse with the DJI Ronin mobile app. It also unlocks the CamAnchor function that lets you designate camera positions that can be toggled between in real time during a take. The app also allows you to make refined adjustments to the responsiveness and speed of each of the gimbal’s motors.

Supports Focus Control and a Dual Handle A dedicated accessory dock on the side allows a dedicated DJI focus command unit to be mounted to the 3-axis gimbal, for smooth manual focus pulls and transitions. The Ronin S also works with a range of other DJI accessories like the dual handed grip that provides enhanced weight distribution and more comfortable shooting without sacrificing control, or the camera focus or shutter triggering ability.

Versatile Mounting Options and Accessories The DJI Ronin-S Gimbal has been carefully designed to be an incredibly versatile tool for cinematographers and directors who want to push their creative boundaries. It can also be mounted to a remote-controlled buggy for low-perspective shots and mounted on a jib for stabilised crane shots. The stabiliser also includes several accessory mounting ports that can be used to attach LED lights, wireless video transmitters, monitors and other accessories